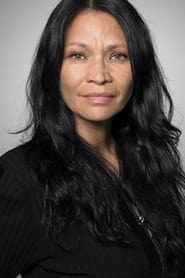 Michelle Thrush is a Canadian actor and activist. Thrush is best known for her leading role as Gail Stonee in Blackstone for which she won the Gemini Award for Best Performance by an Actress in a Continuing Leading Dramatic Role in 2011, and her recurring roles as Sylvia LeBret in North of 60 and Deanna Martin in Arctic Air. Thrush starred in the Palme d'Or and Cesar award nominated film Jimmy P: Psychotherapy of a Plains Indian.