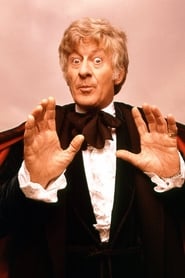 John Devon Roland "Jon" Pertwee (7 July 1919 – 20 May 1996) was an English actor, comedian, entertainer and cabaret performer. Born into a theatrical family, he served in the Royal Navy and the Naval Intelligence Division during the Second World War. In his early career he worked as a stage comedian, which included performing at the Glasgow Empire Theatre and sharing a bill with Max Wall and Jimmy James.