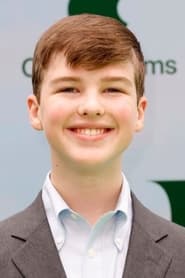 Iain Armitage is an American child actor. He is best known for Young Sheldon, a prequel to the sitcom The Big Bang Theory and the HBO miniseries Big Little Lies. He also appeared in the films The Glass Castle (2017) and Our Souls at Night (2017). His acting debut was in an episode of Law & Order: Special Victims Unit.