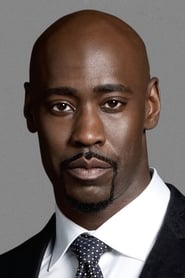 David Bryan "D.B." Woodside (born July 25, 1969) is an American actor. He is perhaps best known for his portrayal of White House Chief of Staff (and later President) Wayne Palmer on the FOX action/drama series 24. Additionally, he is noted for his roles as bass singer Melvin Franklin in the NBC miniseries The Temptations, and as Robin Wood on the WB/UPN series Buffy the Vampire Slayer.