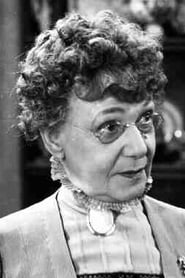 Jean Adair (June 13, 1873, Hamilton, Ontario, Canada — May 11, 1953, New York City) was a Canadian actress. Born as Violet McNaughton, she worked primarily on stage but also made several film appearances late in her career, most notably as one of Cary Grant's dotty old aunts in Arsenic and Old Lace, a role she originated on Broadway. Like many stage actresses of her era, she also appeared in vaudeville.