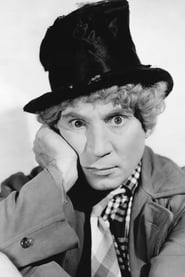 Arthur Adolph "Harpo" Marx (November 23, 1888 – September 28, 1964) was an American comedian and film star. He was the second oldest of the Marx Brothers. His comic style was influenced by clown and pantomime traditions. He wore a curly reddish wig, and never spoke during performances (he blew a horn or whistled to communicate). Marx frequently used props such as a walking stick with a... Read more