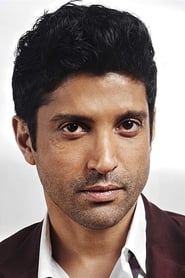 Farhan Akhtar is an Indian film director, screenwriter, producer, actor, playback singer and television host. Born in Mumbai to screenwriters Javed Akhtar and Honey Irani, he grew up under the influence of the Hindi film industry. He began his career in Bollywood by working as an assistant director in Lamhe (1991) and Himalay Putra (1997).