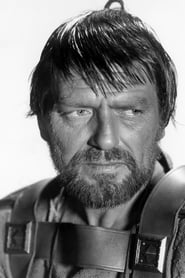 Charles McGraw (born Charles Butters) was an American stage, screen, and television actor. He developed into a leading man, especially in film noir classics during the late 1940s and early 1950s. His gravelly voice and rugged looks enhanced his appeal in the noir stylistic genre and provided him many roles as cops, military officers, and the such.